In the last week of my recent US trip, Anusha and I tried to cover the cities of Philadelphia, New York and Boston. When the time for travelling between these cities is factored in, we had almost no time to see any of these cities properly. The weird policy of the hotels in the US to have check-in after 4 PM and check-out by 12 noon made the problem worse. It also didn't help that the sun used to set around 5 PM.

We spent about 2 and a half days in New York while staying in New Jersey and we still managed to visit five families of our relatives, meet Saikat and Kalpana and see some of the most famous tourist attractions in New York.

Hotel accommodation in New York, especially Manhattan, seems insanely expensive, even for the hotels with only the most basic of amenities. Ditto for car rentals and parking charges. Fortunately for us, decent hotels in New Jersey are somewhat more affordable and there are excellent public transportation options for shuttling between NJ and NYC. As a matter of fact, we stayed in a hotel in Jersey City that was a five minute walk from the Journal Square PATH train station. PATH trains were numerous and frequent throughout the day and took us into the heart of Manhattan in 20 minutes. Within New York, the excellent subway system made travelling within the city relatively painless.

Visiting the Statue of Liberty and the Empire State Building took half a day each because of the number of tourists and the elaborate security procedures. The view of New York City from atop the Empire State Building was very nice and the audio tour by "Tony, the cab driver" was quite useful for an utter newbie to the city. By the way, I didn't know that the Statue of Liberty was made out of copper sheets and the green colour was due to the usual patination of copper. 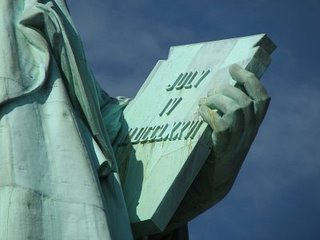 12x Optical Zoom is Cool
Central Park was quite impressive with its lush greenery and peace right in the middle of Manhattan. Actually it was amazing just how many parks there were in Manhattan itself. The Grand Central Station was simply awesome for a train station. The New York Public Library was fairly impressive as well. Times Square in the night was just as they show on TV and in the movies but for some reason it had just a lukewarm effect on me. The site where the twin towers of the WTC stood seemed big and eerily empty. Walking on the Brooklyn Bridge was a charming experience. It was nice walking around in Manhattan soaking in the sights of the city and gaping at the numerous skyscrapers.

We didn't get time to watch a Broadway show or visit any of the famous museums. In a city with more than 13,000 restaurants offering the most varied cuisines in the world, we were mostly so pressed for time that we used to just grab a quick bite in a fast food joint. Some day I hope to come back to this city and stay for at least a week or more.

We were not able to see much in Philadelphia due to a lack of time and Boston was only slightly better. In Boston, our misfortune was compounded by the long-term renovations being carried out at the sites of the Boston Tea Party and the Bunker Hill Monument. As if that was not enough, it was also raining persistently throughout the first half of the day we had set aside to see the city. We still managed to follow some of the Freedom Trail, see the USS Constitution and explore Quincy Market, Faneuil Hall, etc.